Glass at the MCG

The MCG is the largest sporting stadium in Australia. On Friday night, it was was home to the 2013 AFL Grand Final replay match between Hawthorn and Fremantle.

With two mad Hawthorn fans in the family and the official unfurling of the 2013 premiership flag taking place, it was always going to be a game that we were a strong chance to attend!

It also provided a great opportunity to kick off an important event on the APHS Pharmacy calendar, the Very Special Kids 24-hour Treadmill Challenge. Very Special Kids provides flexible family support programs, planned and emergency respite and end-of-life care for families caring for a child with a life-threatening condition.

APHS have supported Very Special Kids for many years after being introduced to the amazing work that they do by close friends of Stuart and I. VSK depends heavily on fundraising to support their program and the annual 24-hour treadmill challenge is a significant contributor to this (along with the annual September Pink Piggy Bank challenge — explaining the presence of our lovely pig in the photo below) and one that APHS team members and friends sign-up to participate in with great enthusiasm. 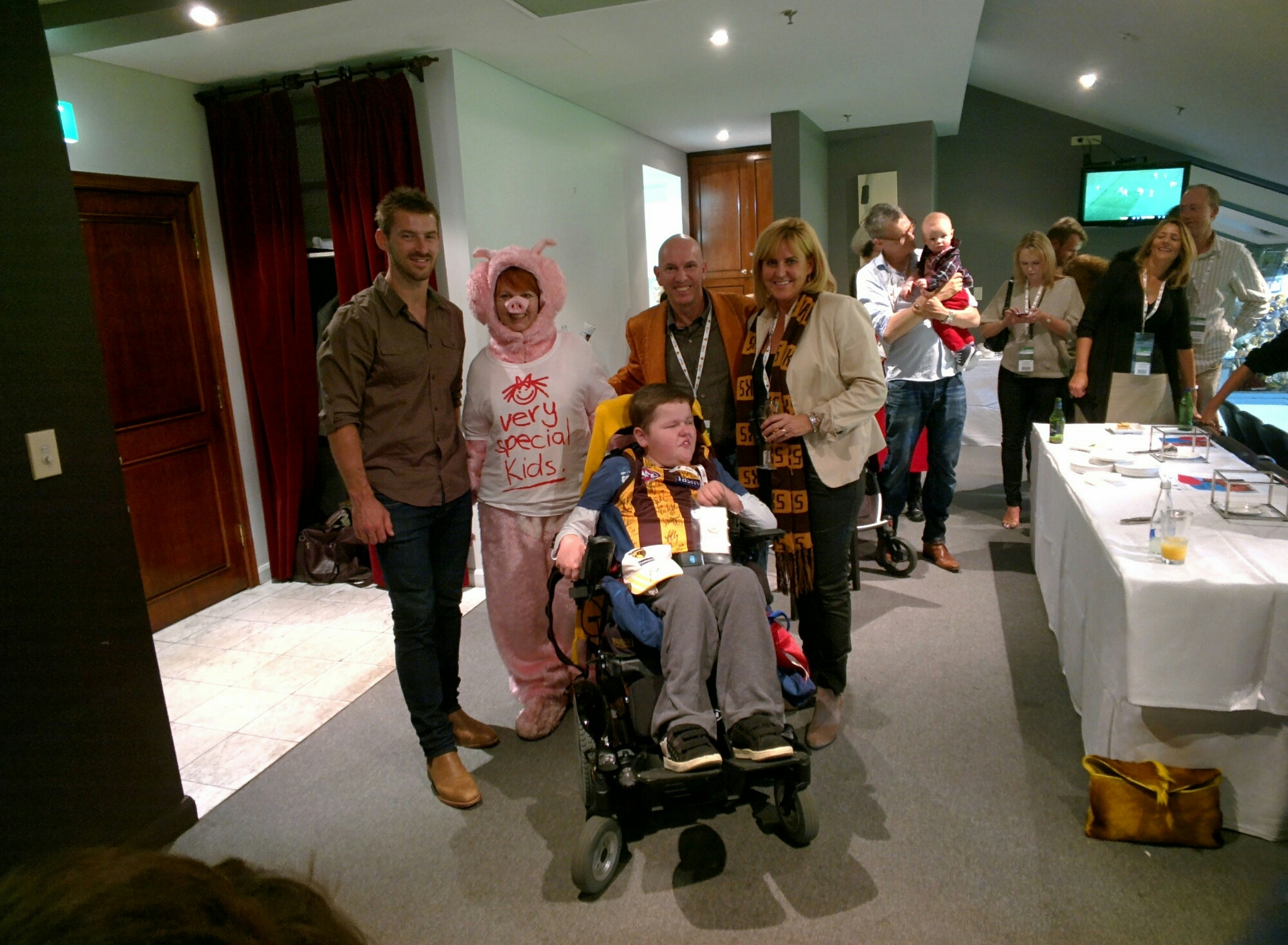 Last night provided the opportunity to launch the 2014 APHS team for the VSK 24-hour Treadmill Challenge, but with a twist. For the first time the treadmill can be replaced with a spin bike and a couple of keen cyclists have lobbied for the change. So, this year, Team APHS will be spinning for 24-hours!

The sign-up sheet was complete in no time, and some of the time-slots were double booked. This says a lot about the enthusiasm people have for VSK, which is wonderful to see.

It was lucky we had the challenge to plan for and occupy our attention, as the football game ended up being a very one-sided affair (much to the disgust of the lone Fremantle supporter in the room)! Between the dominant result and the excitement of having Brendan Whitecross, a Hawks player who is currently out injured, join us for the night, the young Hawks fans (and their dads too, if truth be told!) were absolutely delighted with the way the evening panned out. It was great to have Brendan also sign up to join our spin bike team. He thinks that with the number of hours he is logging on the bike as part of his knee rehab he’ll be unbeatable.

So, where does Glass come into the picture?  As always I had it with me, ready to take some pictures and hoping to record some of the incredible atmosphere that only a packed house at the MCG can deliver. Unfortunately, it was a long way from a packed house (not reflective of the controversial new differential seat pricing policy according to the AFL?). I didn’t end up with too many opportunities to capture anything as I was too busy demo-ing Glass to everyone there! I did get one short video sort of showing the roar of the crowd when a goal was scored, but not anything truly reflective. I will have to try for that another time.

Many of our guests had been reading about my adventures with Glass and arrived hoping for a chance to try it out, but the thing that really surprised me was how many of the kids were desperate to have a go. My nine-year-old son’s friends were all lined up waiting for their turn, and were even prepared to turn their backs on the football while they tried it out (unheard of for AFL obsessed boys in Australia). The universal verdict was: ‘We all want one’ and: ‘It would be so cool to have at school to wear during tests so we could say, “ok glass, give us the answers!”‘ 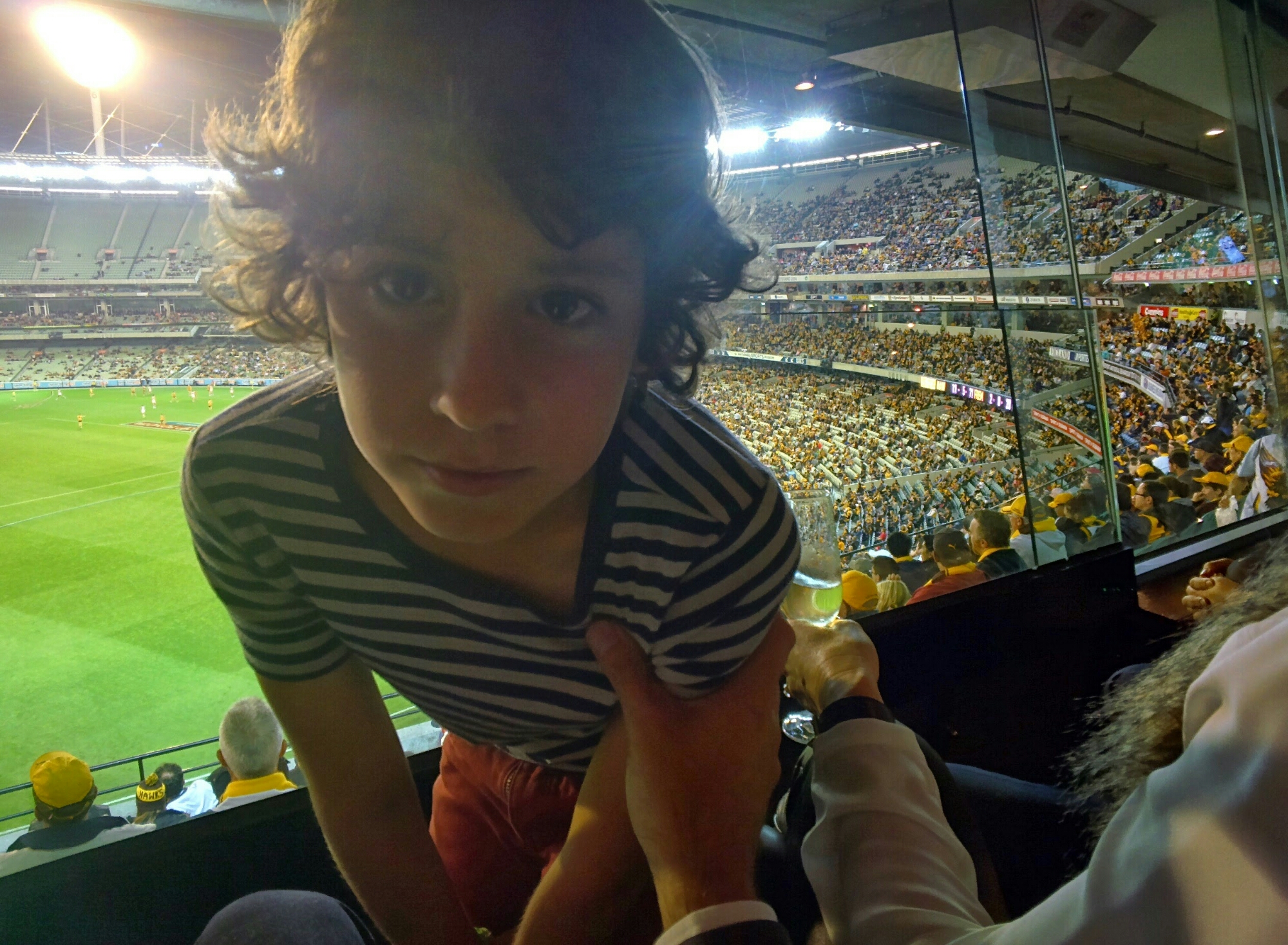 The MCG is an iconic place in Australia, and it was great to capture it through Glass last night…

And again this morning from our favourite place to stay when going to the footy, the Melbourne Hilton.